Provincetown at the tip of “The Cape” in Massachusetts is one of our favorite places in the world.  We love that quaint little seaside town feel.  The smell of the salty air, the beautiful sunsets, the shell and sand alleyways.  It’s all so intoxicating.  We decided that celebrating our 4 year anniversary and a well deserved Babymoon there, would be perfect!  We packed up our things, Mary’s things, and Laney’s things early Saturday morning, left our half unpacked apartment just as it was, and dropped the ladies off at their respective babysitters (other foster parents we know) for the week.  We hit the road at about 1pm and got ourselves ready for a 5+ hour drive with a ton of snacks for Callie, plenty of water, and of course, our usual road trip soundtrack, “Jagged Little Pill”.  We know every word to every song, and crack each other up with our best impressions of Alanis Morissette’s little screechy yodel.

We got there around 6:30pm, dropped our bags off at our cottage so we could change our clothes (it was chillier than we thought it would be), and went out to grab a quick bite to eat.  We made it an early night so we could go back and “sleep”.  We really needed to “sleep”. 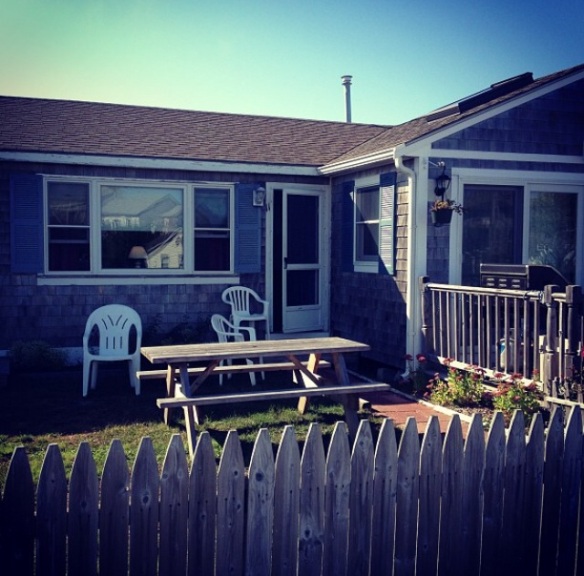 OUR HUMBLE ABODE FOR THE WEEK

Day 2 consisted of a pretty late start.  We hardly ever get to sleep in anymore (8 am is a sleep-in for us) so at 11:30am, we woke, got ready, and head out for a nice walk through the town.  We had breakfast at our favorites breakfast spot, visited loads of shops, grabbed a cool shark tooth mood necklace for Mary which we knew she would love (and she did! She won’t even take it off to shower so that she “doesn’t lose it”), had delicious homemade sherbert, and enjoyed each others company electronic free.  It was nice to have conversations about random things with Callie again.  Parenthood leads to lots of conversation about the kids, their development, what they did that day, what made you crazy, and what made you smile.  We hardly talk about adult things anymore, so I really treasured the hours worth of conversations that we had about all types of different, random things. Our second day ended with a steak dinners and a bottle of O’douls.

Day 3 was a great day! We woke up really late (almost at 12pm) got ready and made our way into town.  Our 4 year anniversary.  It was a day to reflect on our love, on who we are as individuals, and on who we have grown into as a couple.  Every time I looked at her, I was overpowered with so many emotions.  I held her hand tighter that day, kissed her a little harder.  Images flashed in my head of the first time we held hands, kissed, made love, talked about marriage and starting a family.  Nothing in my life has ever felt as right as being next to Callie, and now our love has risen to the next level where we get to share it with our beautiful boys.  To celebrate, that day we decided to do a tour of the Pirate Museum.  It was actually pretty cool! That’s one of the things I love most about Callie.  She’s an undercover nerd like I am, and loves learning weird, random and totally useless facts about pretty much anything.  In this case, it was about the pirate ship “Whydah“.  It. Was. So. Freaking. Cool!  It’s the only real live pirate treasure ever found! We got to touch real “pieces of eight” (silver coins) that date back almost 300 years! We could have touched coins that were handled by Captain Sam Bellamy himself.  It was pretty awesome! All of the artifacts were found on the ocean floor, after searching for over 5 years for the fabled ship, all under almost 15 feet of sand.  It was all pretty neat!

Afterwards, we decided to take a walk on the beach.  It was a beautiful evening, with a slight chill in the air that was perfect for holding hands and walking pressed next to each other.  We laughed, drew in the sand, took some fantastic pictures, watched a seal show up and disappear, and placed our hands on Callie’s belly as the boys squired and wiggled and enjoyed the beach and fresh air right along with us. 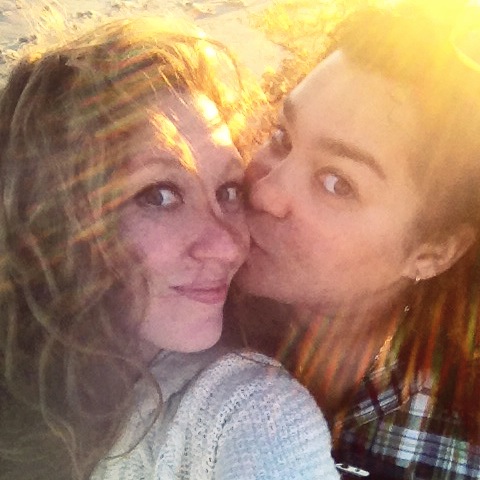 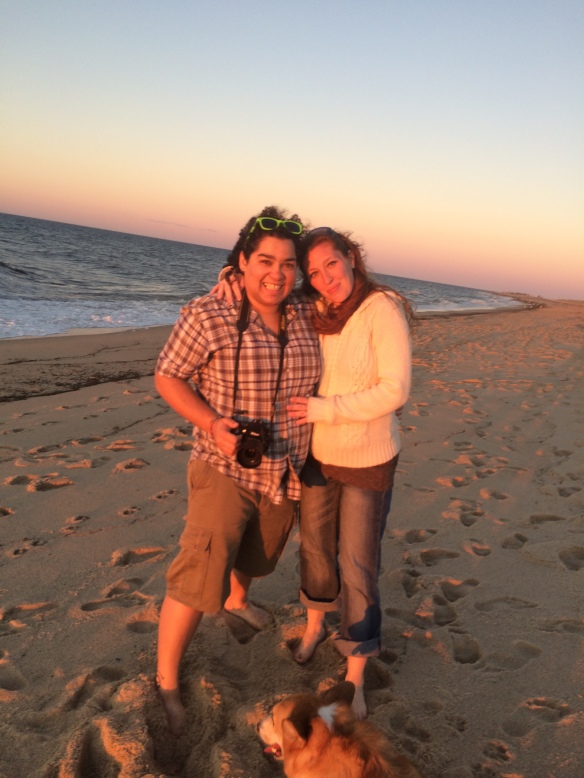 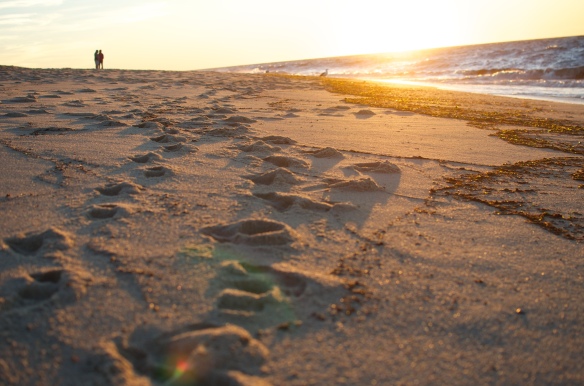 That night we went out for delicious lobster and some karaoke, where I gave a shout out to my lovely lady and my boys and sang, “Just The Way You Are” by Bruno Mars that left most of the people in their seats all misty eyed, including my Callie. My boys were apparently moving around all over the place when they heard their Mama sing!

Day 4 started later than any other day on the trip.  We didn’t even get out of our rental until 1pm, which made it increasingly hard to find a spot for breakfast.  We did find one ( but they only served the very specific menu items with no substitutions), and while we ate, we say this guy… 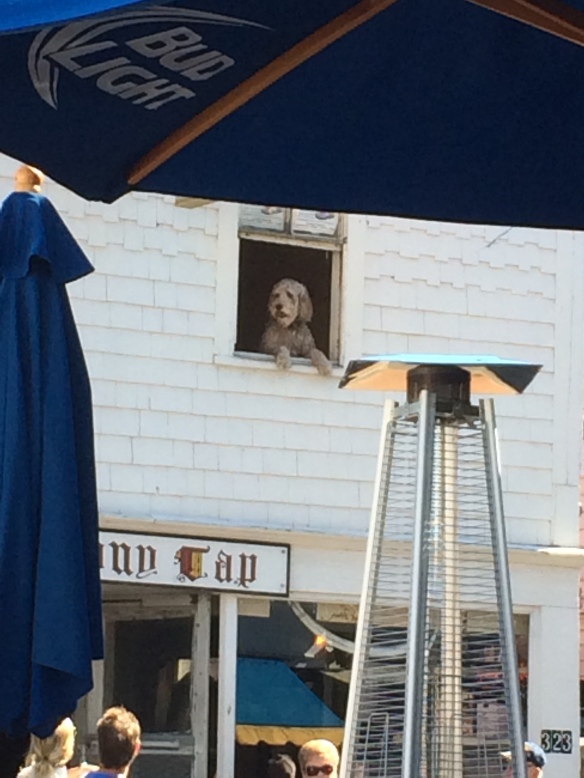 which was pretty funny! He was watching all of the people walk up and down the street and looked like a human if you watched him long enough.  That day, we took a trolley tour around the town from the restaurant laden West End and back around to the Art District on the East End.  We learned some cool things, like each house (if built before the 1900’s) has a little blue plaque in the corner that tells what year it was made in and who owned it.  We also learned that cranberries were indigenous to that area. They used to be called “Crane Berries” because the leaves looked like cranes! I KNOW RIGHT!?!?! Also learned that the Pilgrims settled in Provincetown first, but after about 2 months, and land that was un-tillable and no fresh water, they shot straight over to Plymouth.  Lots of cool stuff! We had some more lobster for dinner (You can’t beat a 1 1/2lb lobster for $15!), ended the night with some more (drag queen) karaoke which was pretty hilarious, and then went back to our cottage.  Before we went inside, we noticed that the sky was so clear that you could see what seemed like every star in our galaxy.  We stood there staring at the sky and said, “If everything is gonna be okay with the boys, you’ll let us see a shooting star.” Wouldn’t ya know, that right as I finished the sentence, a star streaked, big and bright, right across the sky! Callie and I both gasped and laughed. The universe has had so many ways of letting us know that the boys, our girls, and that we, as a family, are going to be okay.

Our Babymoon ended Wednesday morning, and it was awfully sad.  We weren’t ready to head back to our real lives.  We wish we could have just stayed out on the Cape, just the two of us, for at least a couple more days.  On the drive back, we held hands the whole way, asked each other what the 3 best things about the trip were, and looked forward to seeing our little ladies.  We promised to always make one on one time for each other, and that no matter how crazy and busy our lives get, we will always communicate what we need and do our best to give the other what they ask for.  I’m lucky to have a woman like Callie and I promised to never forget that. I don’t think I ever could, even if I tried…