I figured the “10 things on a…” would be the easiest way to get a lot of info in pretty quickly!  It has been quite crazy at Casa Mendez the past month or so.  Lots has happened!

LEARNING TO NAVIGATE THE ROPES

2)  Mary turned 9!  Yeah, that totally happened, and sure enough, just like that, she is one year closer to being a teenager! She had a little party with some family and friends to celebrate, and then had a sleep over with our niece (her favorite cousin!) and her best friend.  They were up until past 2am!  It was really cute to see her having such a great time with her friends.  There has been a shift in her too.  More honest about her feelings, more in tune with people’s emotions and needs (which is VERY new!), and also, managing her own emotions a little bit better.  This is a pretty huge transitional time for her, and we’ve seen a ton of growth in her since we actually started getting more honest and stopped treating her like this fragile little flower, and started treating her and talking to her like the maturing young lady that she is.  I know that sounds crazy because she just turned 9, but when you meet Mary, you would assume she was easily 11 or 12 because of her demeanor and the way she expresses herself.  So, yeah…9! Should  be an interesting and pivotal year in Mary’s life and development…hopefully, with all the stuff coming up, we won’t fuck it up! 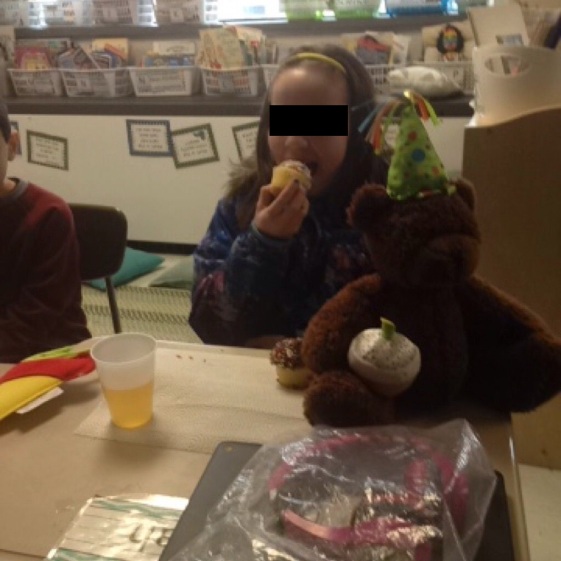 SPECIAL BIRTHDAY BEAR AT SCHOOL FOR THE BIRTHDAY GIRL!

3)  Speaking of upcoming transitions for Mary, all paperwork has been turned in, and currently we are just in limbo waiting for the adoption attorney to call us and let us know what the possible dates are that we can select for finalization.  We were wondering what the heck the hold up was since we had submitted all of our paperwork before the end of December and we were told it normally takes about 2-3 weeks to receive a date.  Good for us for calling to see what the heck was going on, and our attorney tells us that she has been going back and forth with the court because our marriage license doesn’t have Mendez as Callie’s last name, and like, WHY THE HELL WOULD IT!?!?! Sammie Mendez wasn’t marrying Callie Mendez, was she?  NO! She wasn’t!  And instead of the lawyer having called me to tell me that, her assistant thought she would sort it out on her own.  So I just emailed her a copy of Callie’s new SS Card, her new license, as well as copies of the old ones and the receipts from the name changes at both the SS Office and the DMV.  All was squared away, and now, we are two weeks into this 2-3 week wait.  So, looks like, we’ll likely have our finalization late March – early April, which is actually pretty awesome because it is more likely that we would be able to host Mary’s “You’ve Always Been Our Daughter in our Hearts, But now the World knows it too!” party outside, so we can house more people without paying an arm and a leg!  Believe me!  The boys 1st birthday party’s ran us about $2k, and $800+.  And since technically this would be Mary’s baby shower, christening, and 1st birthday (all of which we missed) wrapped in one, we’re ok with going all out for her. (*Mary was given a choice between a big birthday party at some bouncy castle place or wherever with friends, or a huge adoption party, she chose the adoption party).

SHE SURE DOES LOVE THOSE BROTHERS!

4)We had a discussion with Mary last Tuesday night about why she isn’t with her birth mother, L, anymore.  Her adoption worker was over the apartment, and we were talking about some stuff pertaining to the case, and some of the issues that have been arising regarding our conditional surrender. Whenever one of the workers is over, Mary gets all nervous giddy, and she starts doing little things to sort of show off in front of them.  Which, I mean, sure!  Whatever.  We’re used to it!  But after the worker left, Mary came over to us and started asking us questions about L, and for the first, first, first time ever, when we responded to the questions of why her sister got to live with L with “She doesn’t honey.  She lives with her grandmother because L still isn’t making good and healthy and safe choices”, she asked, “But WHAT choices?  You always say, ‘not good choices’ but like, like what?”  And so we told her…  We told her that her mom was a drug addict that had a hard time making good choices because when people use drugs, their brains aren’t usually working very well or processing things very well either.  She took the news surprisingly well, but there were a lot of questions about L using drugs, and why people sell them, and why she chose them instead of her, and if she is still using drugs and how can we keep her sister safe if L is still using drugs.  We told her we didn’t know if she was, because now that she is in THIS phase of the adoption process, we don’t really know too much else about her besides what she tells us, and that honestly, we only talk about how Mary is doing.  Ironically, Callie was flipping through channels, and got distracted with the boys and an episode of Intervention was on. Normally, this would NOT be age appropriate or content appropriate TV for a 9 year old, but the episode was about a mother who was addicted to PCP, Meth, and Vicodin and was in the process of losing her children.  We put the boys down to bed, and spent the next hour with Mary watching the show.  During the episode, we would pause the TV to explain things to her, and to answer any questions that she may have, which believe me, were a ton!  We did the best we could, and I  have to say, since that day, something has changed.  Something has shifted in Mary, and it almost seems like she is even more sure about who she is and why she is here.  I know that’s probably a super far-fetched concept for more 9 year olds, but Mary’s like was very different from the average pre-teen.  We talked to her therapist (who saw her the next day) and said that Mary had even more questions for her, but that she was surprised and impressed how much information we gave Mary and how easy we made it for her to understand.  I have to say though, there was one moment after the fact, where Mary and Callie were having a conversation ( I heard about it later)  in the car on the way home from school 2 days later.  She asked Callie about L doing drugs again, and she had to reiterate that Mary being taken away wasn’t Mary’s fault, and for the first time, Mary said, “It’s not?  Not even a little bit Mommy?  Like not even 1%? Nothing?  Even if she didn’t listen?  Even if I told her don’t take me to Florida and she did anyway?”  And we have confirmed this many, many times, basically since day 1, and for the FIRST TIME, the very first freaking time, Callie said she believed it.  And what gave it away?!  The incessant agonizing cries that came from the way back seat of our minivan.  When Callie told me, I lost it.  I couldn’t believe that finally, after more than 3 years, Mary is starting to believe that NONE OF THIS is her fault…and that moment made the really, really hurtful and difficult conversation of the 2 nights before so absolutely worth it.

5)Potty Training…this needed a bullet on it’s own!  Soooooo, I have trained so many kids while I did 10 years of childcare work.  A full week of having them run around in their underwear, a few messes here and there, but normally, by the end of the week, about 90% of my 2 year old classrooms were toilet trained.  We’ve been at this every weekend for the past month (that’s probably the main issue but like, who has time?!?!) and STILL no success.  Levi is much better about this than Noah, and has been more consistent, but good grief!  Why can’t these things come toilet trained already!?

6)  The sicknesses have run amuck in our home.  Callie had (and I quote her doctor) one of the worst cases of strep throat he has ever seen.  He had her on TWO antibiotics and even pain killers!  YES!  Pain killers for strep throat!  And also, all of my children looked like this for the better part of a week…so, yeah…. 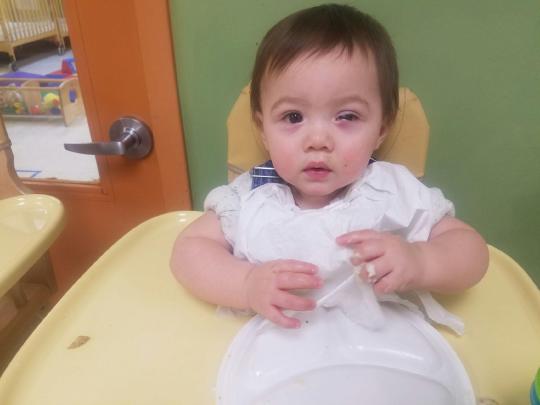 7)  Snow made it’s way up the east coast and I never thought I would have so much fun playing in it.  Having little kids makes the world so interesting again.  Really examining, really looking, really enjoying.  Seeing snow and playing in snow through the eyes of my kids made it such a beautiful experience, and I can’t wait for there to be more so I can take them sledding!

ALL THOSE ROSY CHEEKS! 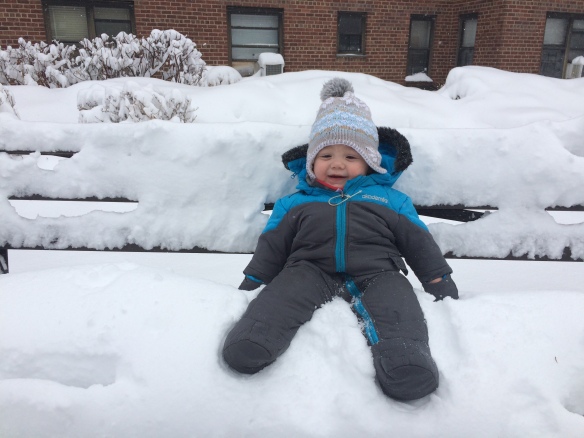 8)  The older the kids get, the more and more we miss all those late night wake ups, the shit ton of dirty diapers, the exhaustion, the bottles (oh god, the bottles!), the car seats and the amount of money that we used to have in our bank account, but mostly a tiny tiny baby in the house and in our arms.  So, we’ve decided that maybe Baby Mendez #5 is actually a thing that could and maybe SHOULD happen.  We’re talking about it….a lot….and have decided that when Austin turns 2 (but knowing us we won’t wait that long), we’ll get started on this baby thing…so…yeah…..