The Day I Lost My Mind and Jumped Out of A Plane:

It was the day before my 29th birthday.  I convinced myself (and somehow Marco, my sister Raquel, and her friend) to go skydiving.  We drove about an hour and 20 minutes from my house, filled out all of the required paperwork and basically signed our lives away.  We weren’t aware before hand that just a few days before, someone had fallen to their death at this same place.  Something about the trained professional jumping tandem with someone having a stroke or heart attack or something like that, mid jump.  It was VERY reassuring to read on our drive to the small airport.

The nerves were out of control.  We were told to walk around to the other side of the building, where according to our weight, we would be matched up with someone, and fit for our harnesses.  At that point in time I was 230lbs, and the weight limit was 225.  They said it was no problem, and that I was gonna go with some guy who was super skinny.  In walks this 6+ft tall, lanky man, and I’m thinking, “Oh great! This poor guy won’t be able to do shit while all baby beluga sized me, is hanging from his shoulders!”   He was actually really awesome and made me feel super safe by checking my harness constantly once I had it on.  Marco and Raquel get fitted, and they talked us through what was going to happen once we were connected to the instructor and on the plane.  Turns out, I was going first, since it was my birthday, and I was absolutely petrified. 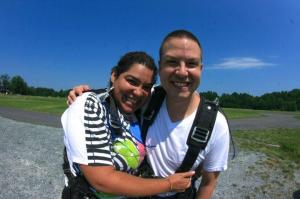 We get out on the tarmac where our little 12 man Cessna is waiting for us.  The engines are getting fired up and my heart is racing in time and cadence with the whirling propeller.  I know I am about to do the craziest thing I have ever done.  I put my thumbs into my harness up by the shoulders, give my best “scared” face to Marco, and watch as everyone boards the plane from back to front. I’m the second to last one into the plane.  My instructor sits behind me as we straddle a small bench.  I lean back, he clips me in to his harness, and he checks again.  I get handed goggles, put them on, and watch as the jumper before me (my camera guy) closes the hatch.  The plane picks up speed, and before you know it, we are at close to 12,500 feet of elevation.  My instructor taps my shoulder and screams into my ear, “OK Sam!  You ready for this!?!?!” 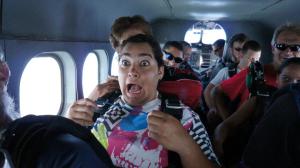 Uh, no Mr., I am not, but I will do my best not to streak the sky gold on my way down.  I swallow my fear, put on my bravest face, and do a squatted shimmy as we make our way to the front of the plane.  I am shaking!  I’m sweating my ass off, and once the hatch is opened, the force of the wind coming into the plane takes my breath away.  I am standing on the edge and there is not way to back out now.  I was on the precipice of a new day, and a new future.  I was looking out at the world.  I was ready to jump, to take a leap of faith and hope for the best.  Callie and I were almost 3 years into our relationship, talking about marriage and children, and I wasn’t sure what I really wanted.  I was scared, and nervous about what the world really held for me.  But that day, my 29th birthday, I prayed to the Universe, that as soon as my feet touched the ground (safely), that I would know what the next steps in my life would be.  That I would know, somehow, what happens next.

With two feet at the hatch entrance, high above the beautiful world, toes curled over the edge, I was given a countdown…1, rock forward and back…2, rock forward and back…and before I could even hear 3, out I went.  What I felt at that very moment is something that I still have a very difficult time putting words to.  It was life altering, to say the least.  That saying, that before you die (even though I didn’t, I could have!) your whole life flashes before your eyes?!  A modified version happened to me.  Suddenly, everything became very clear. I knew what was supposed to happen next.  I knew where my life was supposed to go. For the first time in my life, I saw an image of Callie and I, hair grayed, tea on a table between us as we sit in rocking chairs on our wrap-around porch, patiently awaiting the arrival of our grandchildren.  In every relationship I had been in up until that point, I never quite saw myself like that with someone.  It was incredible!  As the space between me and the ground began to diminish, I looked at the world around me and smiled.  It was probably one of the biggest grins that has ever crossed my face.  I was allowed to rip the cord that deployed our parachute, and as we lackadaisically made our way to the ground, all I could think about was Song of Solomon, where Toni Morrison says,  “You wanna fly, you got to give up the shit that weighs you down.” That day, I let go of everything that weighed me down, of everything that ever held me back, of anything that made me feel like I wasn’t on top of the world like I felt at the edge of that plane.  It was the most incredible experience, and since then, the wings I acquired that day, have kept me elevated and in flight ever since… 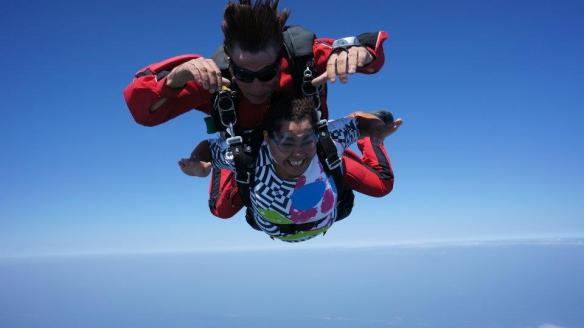