Tuesday was a great day.  It was my second time dropping the boys off to daycare on my own and beginning to get into the swing of our new routine.  The boys were so happy to get to school and see their teacher and their new friends, and I was happy that they were happy.  I kissed them goodbye, waved through the glass and walked out the door and back to the van.  I drove about 5 minutes down the road to the closest train station, found a parking spot, and got on the train to work.  It was as normal a day as ever, until I was starting to feel what I thought were Braxton Hicks contractions, but nearing 30 weeks, I figured it was normal.  I didn’t think anything of it, since they were sporadic and inconsistent and only happened a few times (that I noticed) throughout that day.

Work was great that day, but around 3pm I got a call at work that poor Noah had a 100.8 fever and that someone would have to come get him from school.  Luckily, Callie was already on her way since she had finished up her work for the day.  I gave my boss the heads up that I probably wouldn’t be going in on Wednesday since there’s that whole “24 hour fever free” rule at the daycare center. The director said that Noah didn’t have any symptoms of sickness (I’m guessing it’s the 4 top teeth he’s cutting this week) so if he was fine the next day, it would be totally fine to bring them in.  Sure enough, that night, they both started coughing, both had 101.7 fevers and it was a pretty restless night for everyone in our house, except Mary, who somehow slept like a rock through all the crying (and moms cursing!).

Next day, I stayed home with them, called the pediatrician, and was off to see her for a 10:30am appointment.  Only thing was, we’re a 15 minute walk away, uphill, and Callie accidentally forgot to leave me the van key! We only have one key, and with her an hour+ away in Brooklyn, I strapped the boys into the stroller and took the walk to the doctor.  No infections and no bronciolitis, so back home we went to watch some Mickey Mouse Clubhouse, and have a good old cuddle.  During those cuddles, I started feeling some tightening and lower abdominal pain.

I figured it was either Braxton Hicks again or maybe some gas pains, since I hadn’t used the bathroom that day.  It wasn’t consistant enough for me to even THINK it was contractions but now that I look back at it, it was probably the very early stages of labor.  Wednesday night, I was on the phone with my mom around 8pm for a good hour and a half.  During that call, I was telling her that I was feeling a little weird and not like myself and that I was gettin some weird pains that seemed like contractions, but that they weren’t regular so there was no way they could be.  She told me it was probably gas, to call my OB in the morning, and to go and lay down and relax and not do anything too strenuous.  I actually had an appointment with my OB on Thursday (the following) morning at 10:15, so I figured I would just talk to him then.

That night, things got real! I tossed and turned the whole night.  The boys had another tough night, what with fevers, coughs and new teeth, it was a terrible night.  I noticed that every time I went to get up out of bed, my belly would get extra tight and it would sort of take my breath away, sometimes even having to hold onto the footboard for a second.  You would think I would have known I was in labor, but it didn’t feel like what I imagined it would feel like and the contractions weren’t coming in any type of consistent interval.

Woke up in the morning to see Callie off to work.  She asked if I was still having pains, which I was and suggested that I call the OB ASAP! I told her my appointment was In a3 hours, so I’d ask him when I got there, but I started noticing the pain was coming a little more consistently now.  The Boys got up around 7, so I dressed them, fed them breakfast and then Callie’s mom came over to watch them at 9:30 so I could head off to my appontment.  At this point, I was very aware of the pain and contractions were every 10 minutes on the 8’s.  8:38, 8:48, 8:58… The minutes ticket by and I new exactly what time it was based on the pain.  I mentioned to my MIL that I would give her a call because I was having contractions 10 minutes apart and they were probably going to send me to the hospital, so she might wanna be prepared to call out of work (since Cals was at least an hour away in Brooklyn).

Into the doctors office I go (but not before calling Ticketmaster about 148 times for those DAMNED Adele tickets!!!!) and let him know the second that I walked in “I think I’m having contractions every 10 minutes and I haven’t felt the baby move all morning and he’s super active and I’m freaking out a little so please give me an ultrasound!” all in one breath!  He sent me into the NST room, set me up on the monitors, where I was beyond relieved to hear the baby’s heartbeat loud and clear and STRONG, but also ridiculously nervous to see the peaks and valleys of the contractions registering on the red-lined paper.  The doctor came in about 10 minutes later, “You are definitely having contractions and they look about 3-4 minutes apart…you need to head over to the hospital right away.  I’ll call them and let them know you’re on your way.”

Now I really start to get a little nervous because I’m not even 30 weeks pregnant yet, hardly finished reveling in how amazing it is to be pregnant and feel the baby moving around, or even believing this is actually happening.  After a few phone calls walking through the parking lot, (my MIL would stay with the boys, Callie was leaving work, and my younger sister was on her way to stay with me while Callie made her way over) I make the 30 minute drive ON MY OWN to the hospital a whole state over! With contractions 3-4 minutes apart! Making it safely there, I made my way to labor and delivery, where the nurses were waiting for me with a wristband and a gown.  They set me up to a monitor that the nurses could also see in the nurses station, and about 15 minutes in, at around 12pm, the doctor on call (who was INCREDIBLE!!!!) walks in, and asks if it’s ok to check me.  She wanted to swab me and check if there were any proteins, because proteins mean exposed membranes which means chances are, my water would be breaking soon! After the swab, she did a quick (painful) check and I was ridiculously surprised to hear that I was 6cm dialated and she could feel the membranes bulging!

They moved me into an L&D room, set me up with an IV fluid drip, magnesium sulfate drip, and gave me a steroid injection to help babies lungs in the event that he made his appearance MUCH earlier than anticipated.  My sister gets there.  Unfortunately, because of the magnesium, I needed a catheter which I was less than thrilled about.  Next thing I know, nurses and doctors are showing up, Callie shows up, my youngest sister leaves to get my niece at school, my sister Raquel shows up, and we get all the information we need, because apparently this baby was coming TODAY! All of this happening while I am doing my best to breathe through my contractions which are now coming about 1-2 minutes apart, lasting about a minute each.  3 hours after arriving, the doctor comes in and we are just talking about getting me comfortable and what I wanted for my delivery. She offered an epidural and I refused, mainly because the pain wasn’t unbearable.  For the most part, on a 1-10 (10 being KILL ME PLEASE!) my pain was manageable and at about a 7.  I figured, “I’ve already gone more than half way, let me just stick it out!”  With Raquel and Callie rubbing my hands and shoulders, playing Spanish Christmas carols, being silly, and Facetiming my mom to help coach me through contractions, things seemed to be going pretty well.  My doctor came back in at about 4pm to do another check.  “Well, there’s no cervix there, baby is engaged, 100% effaced…you’re having this baby soon! I don’t want to break your water.  I want it to happen on its own because he so small, I don’t want him to be distressed.”  For another 30 minutes I breathed though contraction after contraction, sometimes back to back with no break between.  I started to feel a lot of pressure on my bum, like I had to move my bowels, and I started clenching down and forgetting how to breathe, but Callie was reminding me that I was doing so well and to not forget how I got that far and to keep breathing through the contractions and not against them.  I told her to get the nurse because I was ready to push.  The nurse called the doctor, and upon a quick look, she called Callie over. “Is that his HEAD?!?! With all that HAIR?!?!” “Mmmm hmm!”  And she took a picture and showed it to me, and I saw his little head, and as my pain reached a 10, I just knew, with every ounce of who I am, what I needed to do!  My doctor told me how to push (chin to my chest after a deep breath in,  and push with my bottom) and I pushed. With the first push, my water broke, sending a spray of fluids that got my sister and Callie, my doctor and me! I pushed with everything in me. I pushed to the point where I thought I would likely pass out, and I felt his head come out, and then this wave of euphoria and uncertainty and love for my child and my wife and I knew that I needed one more good push, and the contraction came and 4 minutes after I started pushing I felt his shoulders make their way out, and he was here, and I laid back, and cried my eyes out, and my wife kissed me and told me how proud she was, and it was done! At 4:53pm on 12/17/15 my boy was here, just 5 1/2 hours after getting to the hospital!

Callie cried as she cut the cord, and the NICU doctors checked him out.  The little guy didn’t even cry. He was laying there on the table with his eyes wide open, looking up at the people around him, not making a sound.  Just flailing around waiting for someone to bring him to Mama.  He finally decided he’d let us hear his little voice so they wrapped him up like a 15″ burrito, and I got to hold my son for the first time.  We kissed him, and held him, and said a little prayer, and they whisked him off to the NICU.  I delivered the placenta, and the Dr, gave me one stitch for my first degree tear.  The whole time I was there (those 5.5 hours) all I wanted was a cheeseburger! “I wish I could have a fucking cheeseburger” must have been said about 15 times in that time.  As soon as I was stitched up, my doctor gave me a high five and said to no one (or everyone!) in particular, “Someone get this girl a fucking cheeseburger!!!”

After all that hardwork, that cheeseburger was well deserved… 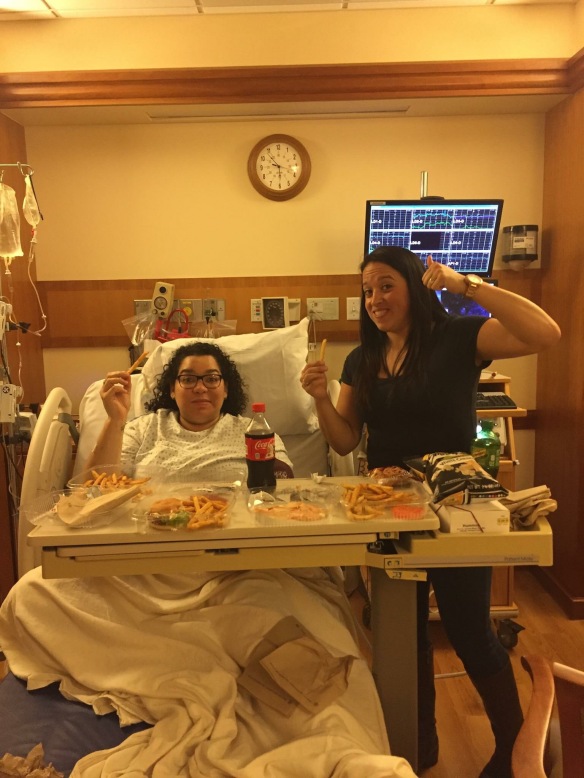