My little Noah.  These past 2 months have been really rough for my little guy.  There has been a lot of adjusting and acclimating to new environments and lots and lots of sickness.  In the past 4 months he has had 3 ear infections, but the last 2 (in the past month) have both been horrible double ear infections, that have my baby tossing and turning and whining all night.  We were feeling like it had started to affect his hearing, and in turn his speech and that he probably isn’t as verbal as Levi is because of it.  Well, he had to prove us wrong, because last week, the kid’s language EXPLODED and suddenly he went from a very raspy grunt to saying Mama, ma (for whatever reason this is how he calls Callie), cat, gato, Nene (his nickname), Nah-no (Macho, levi’s nickname) Moh (more), ah-ma (grandma), Ya-ya (Mary’s real name), uh-oh, wa-wa (Agua). 11 words y’all!!!  11 whole words in one week!  The same week that he had this awful, 103.7 fever inducing ear infection.  SO wild!  But we are so so proud! In fact, this morning, my parents came over to pick up Levi since he was diagnosed with RSV/Bronchiolitis and needs nebulizer treatments that his daycare won’t/can’t administer, and Noah spoke his first full sentence, while screaming and crying at the top of his lungs and pointing at my parents car, “Nene bah-bye a Nah-no! Nene bah-bye a Nah-no!” Nene goes bye bye with Macho…damn near broke my heart!

Because of the total number of ear infections he has had in such a short period of time (6 in 6 months, 4 in 3 months, and 2 in one month) and the increasing frequency, we though, “It may be time to speak to a specialist,” so our pediatrician recommended a really great Pediatric ENT around our area.  We have yet to make an appointment, but I think it’s really just because I’m afraid that my tiny baby is gonna need tubes in his ears.  Despite all the amazing things and all the success that I hear about, it still scares me to know that my baby is gonna be put under and that he’s going to be in pain, and I hate it! I worry about an allergy to anesthesia, about how scared he will be, about not being able to hold his hand through it, and that maybe, after all that drama, they just won’t work. We’ll see how it will all play out.  We also hear that they outgrow it around 2ish, but do I really wanna sit and watch my little guy in pain for another 8-10 months?! NOPE!  So we’re exploring this tube thing, doing our research, and hoping that for now, this is the end of the ear infections. 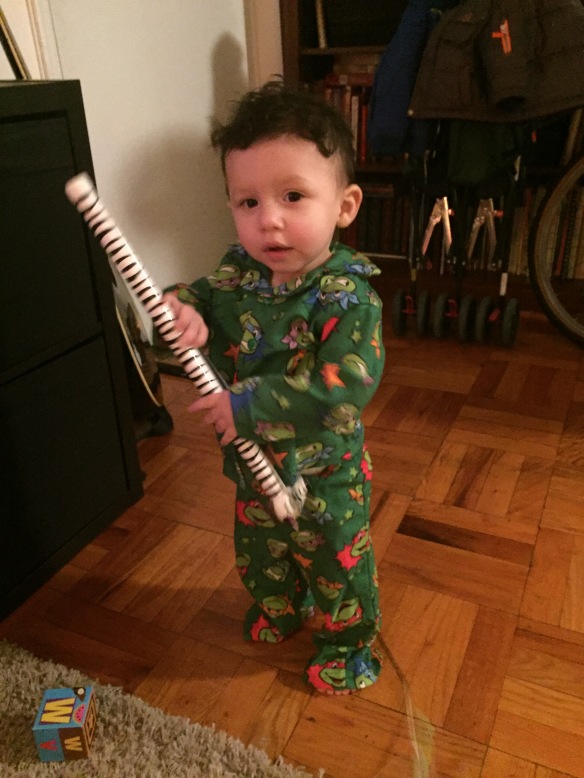 Noah’s gross motor skills are developing so well, and his fine motor skills seemed pretty advance for a kid his age.  He can make his stacking boxes in to a small tower and then of course knock them down.  He can throw and even kick a ball!  You have no idea how excited I am to have babies that actually GET soccer!  Like, get excited when they make a goal, and will run away with the ball when I chase them.  He’s also gotten pretty good at feeding himself with a fork, not so much a spoon yet (which I wish he would hurry up and learn, because he LOVES soup and it takes forever to feed him since he’s that kid that won’t eat until he swallows what’s in his mouth after chewing for a whole minute!!).  He points and says, “Ah Nene” (para Nene/for Nene) when he wants something.  He also ROCKS at using a shape sorter.  He’s an awesome climber that is already giving Mama heart attacks, but mostly, above all, he is our sweet affectionate boy, who kisses you when you fake cry, loves to hold hands and hug his brothers, and sister and will almost always share his food with you.  Except for string cheese.  This boy LOVES his string cheese!

OH SNAPCHAT FILTERS! YOU CRACK ME UP!

ALL READY FOR SCHOOL HAHAHA! MY SON IS GONNA BE HELLA HANDSOME WHEN HE GROWS UP!