Phew!! That’s a lot of days to make up, but I’ve had quite a bit going on this past week with planning the boys baptism, some stuff for Mary with school, trying to get our boat together and fix some things that will make it more “sellable”, a visit with our case worker, and just dealing with 3 kids, work, and dr’s appointments.  If you haven’t read my PW protected post, well, it’s up!  Anyways, back to this challenge…

These two can easily be combined.  My favorite city (aside from my own hometown) and my favorite vacation took place in the same country and in the same city.

Amsterdam, Holland, how I love you!  Marco and I spent 8 glorious days half way across the globe.  It was the middle of winter (early January) and it had to be one of the mildest winters they had experience in a while.  We did a bunch of touristy stuff during the day, like visiting the Rijksmuseum and the Van Gogh (actually pronounced Goch, like in Chanukah), the BOLS ( liquor made in Holland and taste testing! YUM!), The Anne Frank House (climbing the stairs to the Annex and being in that space was really overwhelming and heavy), The NEMO Science Museum (AWESOME!), The Canal Tours (super cool, informative, and fun way to experience the city in 2 hours time), and Vondel Park (the Central Park of Amsterdam).  And at night, oh at night!!!  As soon as the sun set, we made our way to The Redlight District and all the shenanigans that went on down there. Drag Queen karaoke, TRUT (translates to BITCH and is a speakeasy LGBT club that you wait 2 hours for in line before they even open the doors! Only 250 people get in, and they give you tickets! Numbered Tickets! No one goes in passed the 250 until someone comes out!), The Erotica Museum, all those glass doors, and of course to my 25 year old self, the Coffee Shops.

We spent those days adventuring, staying up late, meeting new people, and exploring a new place we’d never been to.  We learned how to take public transportation in another country, and also learned that ketchup is a €2 side dish!  A SIDE DISH!!!  You know, I love the Dutch, but they do not know when it is appropriate to give you ketchup.  A grilled ham and cheese DOES NOT require such a condiment.  I’ll never understand!  But we walked (and got lost) A LOT, rented bikes to get a better and more authentic view of the city (bikes have the right of way which was CRAZY to us but when bikes outnumber people 3 to 1, well, it makes sense), tried to get into a live sex show before the bouncer/pimp got nasty with us when we told him that Marco and I were NOT in fact a married couple, and drank delicious Chocomel with Schlagg every day! We promised we would go back every two years.  That has yet to happen, but one day, we’ll be back, and it’ll be amazing.  Probably just as awesome as the first time.

This list could go on, literally, forever!  There are so many things I’ve learned, but the one that has served me most valuable is, “Treat people the way you want to be treated”.  It’s such a simple task, that it often boggles my mind that people don’t get it.  I make it my business to always smile at people if we catch each others eye.  To hold doors for people and offer old ladies a hand when crossing the street.  To give up my seat to the elderly or to a pregnant woman.  To do my best to volunteer or offer a helping hand.  And to always, always offer laughter.  I’ve seen how it can impact people.  It’s amazing.  Be kind, always.

My favorite memory is a toss up between two life altering events.  Since it’s nearly impossible to pick which would be the all-time favorite, I’ll share both.
#1 – The day that Callie and I help hands for the first time, and jumped into the frigid waters of the Sound.  We were anchored between the Whitestone and Throgs Neck Bridges, and neither of us really wanted to get into the water with the rest of our friends despite the fact that it was 90 degrees out.  We decided to just suck it up, hold hands and jump in.  What we didn’t realize was the electricity that would spark the second that our fingers became intertwined.  That’s what started it all.  A simple, “Ok, so we’ll just shut the hell up, hold hands, and jump in!”  And that was that.  A few years later, we were talking about that day, and I was embarrassed to mention the charge that I had felt.  Callie confessed to jolt of energy that she felt that day as well, and how she chose not to pursue it because of the relationship that I was in at the time.  It didn’t take long before us holding hands because a daily activity.
#2 – The moment that the Dr. said that Noah was on his way.  That first cry, it was everything!  It did something to my heart (in a good way) that can never be corrected.  It made me a mother, truly and wholly.  It is one of the best and most treasured moments of my life.

Day 26-Picture of your family

Day 27-Pets
After getting rid of the birds (3 really gross Cockatiels) we are left with Dusty, our bunny, and Gracie, our pretty kitty.  Although I love Gracie (like, LOVE this damn cat) and tolerate Dusty (like, by the skin of teeth tolerate), I just wish we had a dog.  That would be awesome.  A Great Dane who we would call King Maximus.  I would love that! 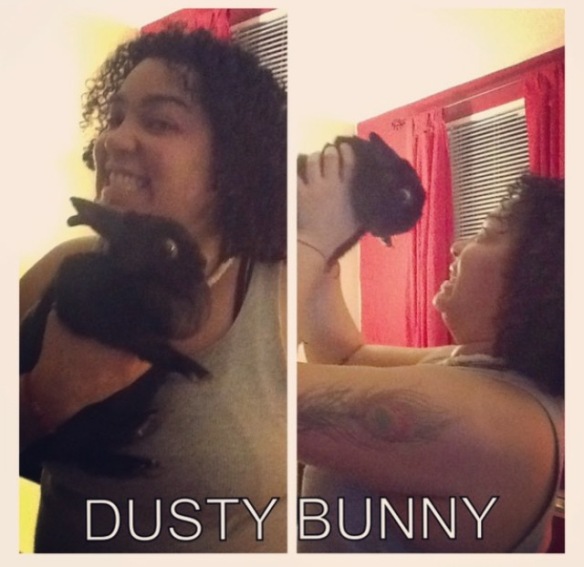