Week 16- Our babies are the size of avocados! One of my friends dubbed them Guacababies, which we think is hilarious! They are doing everything they should be doing.  Their limbs are getting longer and more proportioned to the rest of their bodies.  Their little necks look a little more elongated.  Their little ears are right where they should be.  And they did super splits to show us all the goods! We officially know the gender of both of our babies, but we aren’t telling! Showing up at my parents house after our appointment yesterday was a little scary.  I could totally envision my dad shaking the hell out of me to spill the beans.  He used to do that to us when we were little.  My dad never hit us, (well, once when I was extra fresh but totally deserved it!) but he would grab us by our shirt collar and shake us around a bit!  When your 8, its super scary, but now that I’m older, it’s pretty damn funny!  He even offered to give Callie $20 to tell him! LAWD!!!! They swear they know what they are because of our facial expressions, but I can assure you that we did not let on.  Then my pregnant younger sister, Natasha, shows up and starts interrogating us as well and trying to get an inkling of what they are because she “can see it in our faces!”  I’m certain, we did not!

(I just realized that this post left out the second part! So annoying!)

Then I get a text message from my sister Raquel telling me that she knows what we’re having because, “Me and Sean (her fiancé) know everything!” Suuuuurrreee you’re right! But I entertained her suggestion and verified that she was still up for getting cake pops for the reveal. That’s a go! 60 cake pops thanks to Tia Raquel. Watching everyone get so worked up about this gender stuff is pretty funny. The death threats through text message though, not so much!

On Wednesday, the day before our 16 week appointment with our perinotologist, the nurse called Callie to give her the results for her blood work. She made it sound like something was wrong. Callie freaked, and kept trying to call back. After being on hold for forever, they told her that the doctors were gone for the day but they would make a note. I told Callie, “If it’s important, they’ll call back.” Wouldn’t you know, they DID call back, this time while Cal’s was in the shower! So we called back again, and “it’s after hours. We’ll leave a note.” Good thing we had our appointment the next day! Turns out that the protein levels on the AFP test were really high, BUT the phlebotomist forgot to tell the lab that it was twins! Tools!!! So proteins were high for singletons, but totally normal for twins. PHEW! Mama meltdown avoided!

With that said, every time I see my babies, I lose it! I get so excited! Their heartbeats are music to my ears. I record at least a minute from each session, even though we’re not supposed to. SUE ME! During our sonogram on Friday, we came to the realization that Baby A is actually Baby Acrobat! It was flipping upside down, around, and even decided to moon us at one point! Cutest culito I’ve ever seen! Our little Baby B is still his/her calm self, always stretched out and relaxed. It looks like its always trying to find its finger because again, he/she had the hands near the face being a little dramatic. AS USUAL! I love those babies! This amazing time is going so fast but so slow. I want to meet them so badly, but I love how gorgeous and happy Callie is during all of this. Week 16 is gonna be just as awesome… 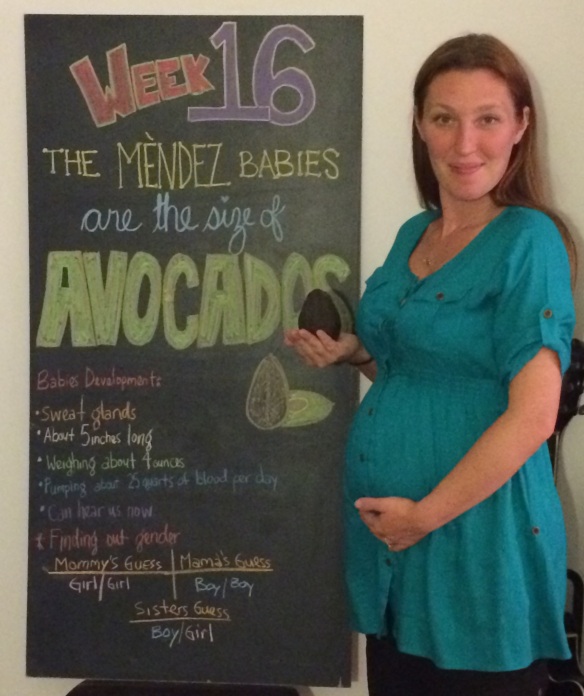 My gorgeous girl at 16 weeks 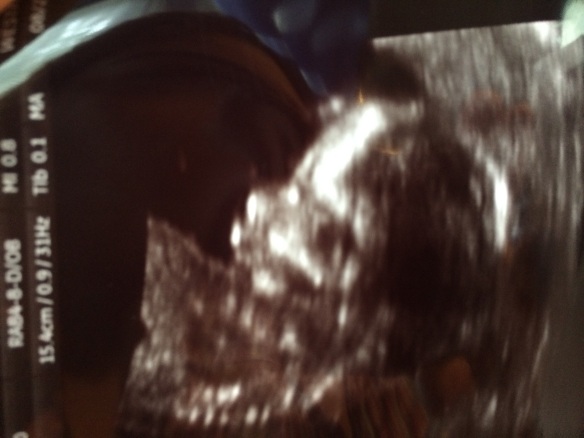 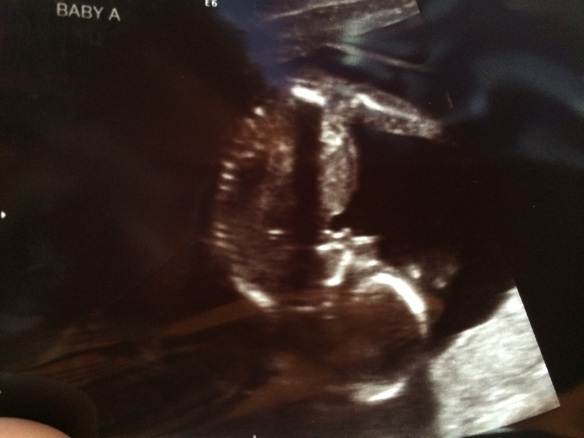 My cutie little Baby Acrobat! Upside down! This one is gonna be a handful, but maybe I’ll overlook it because of that adorable little profile. 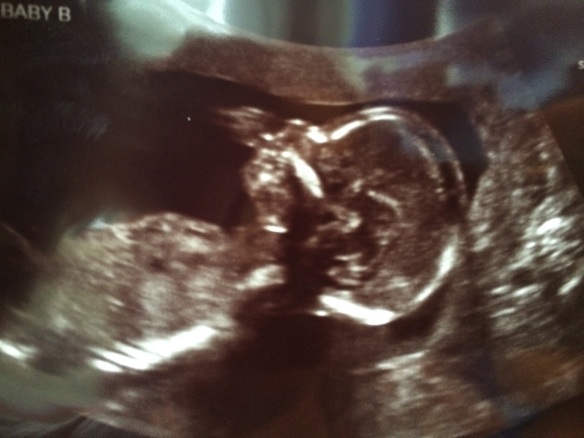 Our Baby B. Mellow baby with a hand near his/her head all the time. And that little nose is to die for!